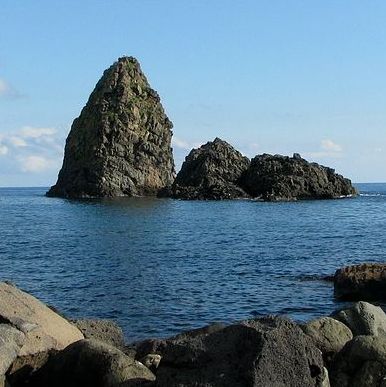 Guided tour of Catania – Walk in the old town to discover the beauty of Catania. After a walk in the middle of the fish market, it will go to Piazza Duomo, the center of which you can admire the lava stone Elephant (called “Liotru”), symbol of the city and the splendid Duomo in Baroque style. The center is cut in two by Via Etnea: you can admire the baroque Via Crociferi, the Roman Amphitheatre, the Opera House Vincenzo Bellini, the University. It will continue to the Riviera of the Cyclops, the coastal area north of Catania, full of legends who owe their mythical Odyssey origin. According to Homer in these coastal areas lived and looked after his flock monocle colossal, Polyphemus, son of Poseidon, the sea god who, blinded by Odysseus after he had devoured six of his companions, in pain and anger hurled to the his ship the massive rock fragments, known today as the islands and the Cyclops, the Faraglioni of Aci Trezza. Even the names of individual places along the Cyclops Riviera – Aci Castello, Aci Trezza, Acireale – are of mythological origin. Again it was the cyclops Polyphemus angry to kill out of jealousy the young shepherd Aci, of which the nymph Galatea was in love. The pleas of desperate Galatea were heard by the gods, and the Aci body was transformed into a river that flows today in the beach where the two lovers used to meet.

There are no reviews yet.

Any cookies that may not be particularly necessary for the website to function and is used specifically to collect user personal data via analytics, ads, other embedded contents are termed as non-necessary cookies. It is mandatory to procure user consent prior to running these cookies on your website.